Dog Trumpet, one of Australia’s most unique bands has gone global with Demon Music.  After thirty years of performing and recording, all 8 albums are available on vinyl for the first time and remastered for digital release.

Reg Mombassa and his brother Peter O'Doherty began their musical careers playing and writing in the ARIA Hall of Fame band Mental As Anything. The Mentals had 20 songs in the top 40 (a record for an Australian band) and a global hit with ‘Live It Up’ that only last Christmas hit #1 on many UK charts.

The Sydney Morning Herald said: “Brothers Peter O'Doherty and Reg Mombassa can't help themselves. The charm oozes from the lyrics, the singing and the instantly appealing melodies. Part of it is down to the absence of posturing, part to the way the catchiness of pop is anchored to earthy grooves.”

Dog Trumpet have released 7 albums so far. Produced by Peter and written by both of them. The title of the first one ‘Two Heads One Brain’ sums them up, the brothers having an intuitive melodic connection that infuses their music with a classic timelessness.

Peter and Reg are also visual artists.  Reg is one of Australia’s most recognised artists well known for his work for the Mambo label, along with graphics, posters, album covers and many decades of fine art. Peter’s fine art painting focuses on the urban and suburban built environment and is equally well regarded.

Dog Trumpet have toured extensively throughout Australia, and a little bit across the US, culminating at SXSW a few years ago.  Demon Music recently approached Dog Trumpet about releasing their back catalogue internationally.  The Demon label was started by Jake Riviera and Elvis Costello who later produced the Mentals single ‘I Didn’t Mean to be Mean’.

Demon Music is known as one of the best catalogue/reissue labels in the world releasing specialist BBC titles and focusing on niche and cult bands.  Digital release on all platforms is 16th July 2021, vinyl release is 29th October 2021.

Dog Trumpet’s new song and film clip ‘Fucking Idiots’ from the forthcoming album “Shadowland” asks of humans “what the fuck are you doing now?”. Why does our species have such a seemingly insane capacity for stupid, cruel, self-destructive and violent behaviour.  If aliens are keeping an eye on us, they must be worried, thinking how ridiculous it is that we still have nation states with vast armies and arsenals on a world that is now seriously polluted and destabilised.

Second single and video from Shadowland 'The Ballad of Clayton Looby'

The song written by Peter O'Doherty

This song is a reminiscence of growing up in the 1970’s on the northern beaches of Sydney.  Barrenjoey High was built behind the sand hills at Avalon and in those days it was a pretty relaxed atmosphere where we seemed to spend more time at the beach than at school.  Clayton Looby was a free-spirited larrikin in my year; an obsessive surfer and ratbag.

The song references his unconventional pirate life following the surf, sailing, riding motorbikes, living in Bali and spending a couple of years in a Japanese jail.  He died a couple of years ago and this song is a salute to his memory and his life.  https://www.youtube.com/watch?v=e6A04vr7Q3E&list=UUEM5WBE8NMsNla8hKmp85ww&index=2

is the third single from Shadowland

“In 1987 I was on tour in London visiting a friend from Sydney who was living there at the time. We spent a few days together looking at the sites, going to galleries, combing second hand shops and markets.  One Sunday she bought shoes and I bought her a book and Nina Simone’s first record Little Girl Blue which we took back to her bedsit.  Little did we know we’d still be together today.”  - Peter O’Doherty

Shadowland is about digital surveillance and how it has been inserted uninvited into so many aspects of our lives. Security cameras, speed cameras, domesic appliances and our own smart phones are filming and making audio recordings of our every move and conversation. The data recorded by those devices is then sold to third par:es for targeted advertising. In less democratic societies this harvested data is also used to control and intimidate their citizens.

Shadowland is a distinctive blending of psychedelia, folk and blues, the album probes the perils and absurdities of human existence, kicking off with the title track Shadowland, a nervous musing on digital over-surveillance; followed by Nina Simone, a song reflecting on romance and memory. F***ing Idiots points out the shameful idiocy of our addiction to war and militarism; The Ballad of Clayton Looby is an anti-establishment ode to a larrikin surfer. “Shadowland” is their eighth album and is released on the 4th November 2022 on Vinyl, CD and digitally worldwide via Demon Music Group.
Signed copies available to order at:      https://dogtrumpet.net/shadowland 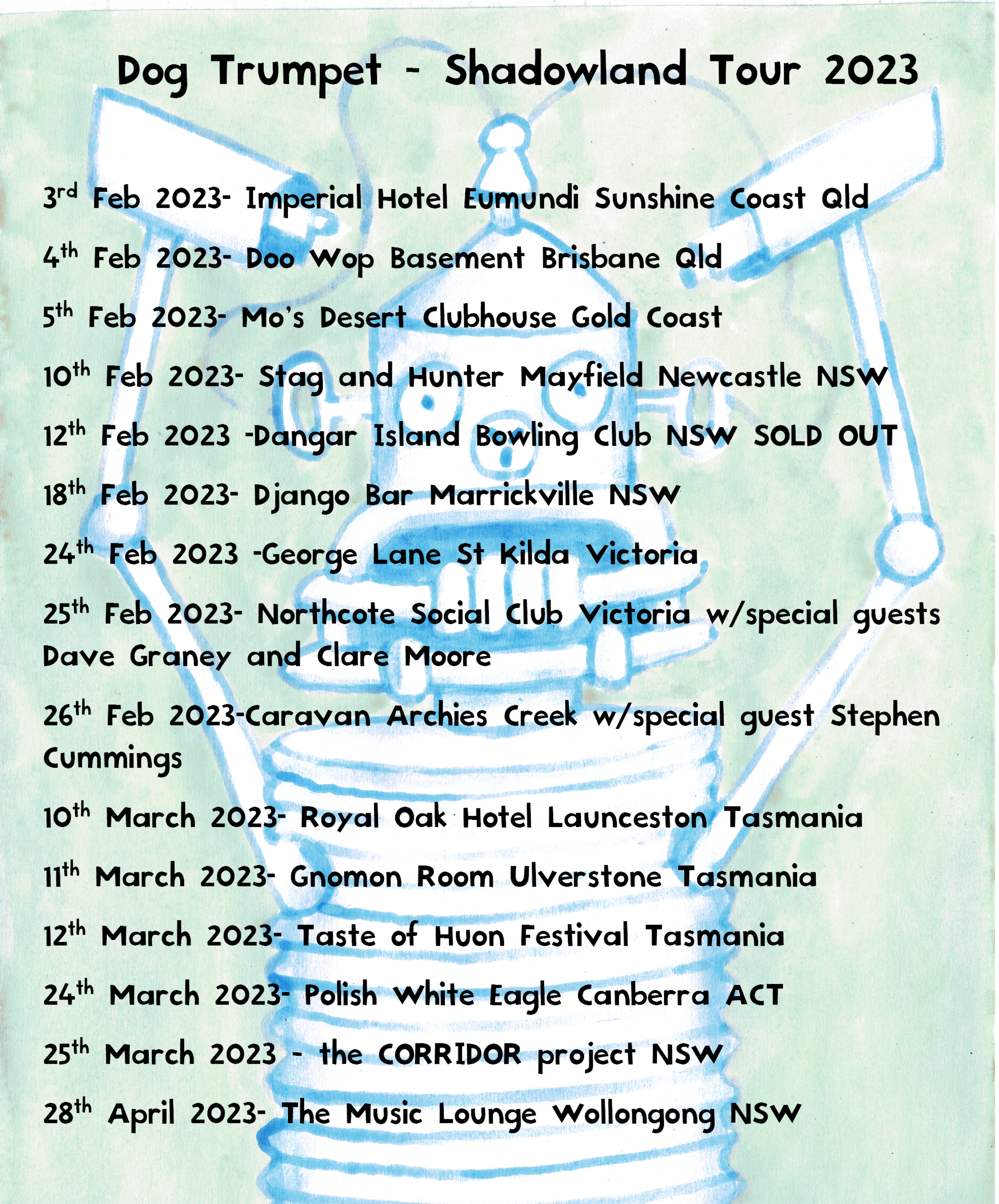